I was recently just outside Richmond VA for two weeks for work.  I don’t think I am alone that despite the fact that I have driven around or through Richmond dozens of times to and from Washington DC, I had not spent any time there.  In fact, after living in DC over six years, before now, I’d only spent half a day in the city.  I am glad to say I have now corrected that gross error and I will return again.

Richmond is the capital of Virginia but most well known as the Capitol of the Confederacy during the Civil War and its Civil War history.  One of the things I liked most about Richmond was its ability to give an overview of the entire Civil War and to put it in context.  Outside of Richmond, I have typically visited battlefields which have a very tactical and narrow perspective of events and it is hard to understand the larger war and issues.

I love history but have never specialized or focused on the American Civil War.  However, understanding the causes of the war are important to both Americans and visitors because the legacy lives on today…  Federal versus states rights continues to play out daily in American politics and is the crux of most issues – health care, schooling, taxes – what is the scope and role of the US Federal Government?  And of course the issue of Slavery of which the horrible legacy lives on in race relations in the United States.

Museum and White House of the Confederacy ($18) provides an overview of the war broken down by year and major battles.  It also includes a walk through the residence as it looked when the Davis’ lived there during the war.  The museum is part of the American Civil War Museum which also has a museum at Appomattox (where the South surrendered and the war ended) and Historic Tredegar (old Iron Works building) by the river.

I ran out of time and didn’t visit the Tredegar museum.  But I did visit the free National Park’s museum which is right next door in the old factory.  It was both worth the visit and free.

Hollywood Cemetery was also a fun stop.  It is the resting place of hundreds of civil war veterans, two US Presidents, and several quirky statues like a dog standing guard over a little girl.

Some non-civil war sites in Richmond include some wonderful street art throughout the city, the Edgar Alan Poe museum in the old building in Richmond, the Virginia Museum of Fine Arts (free) and the James River Park.  Unless you are a huge Poe fan, you can skip the museum.  The Fine Arts museum is wonderful and I absolutely loved the James River Park area.  I was there on a beautiful fall day and wished I had my swim suit to laze about on the rocks.  But as it was, I walked across the bridges and enjoyed the sun, the views, and the history. 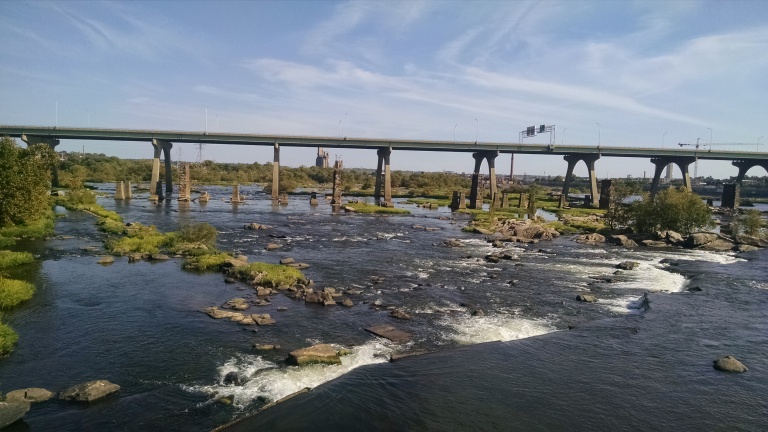 I’ve eaten in Carytown Richmond twice and have not been disappointed.  This area is filled with local restaurants and shops.  I’d love to recommend somewhere else, but my next time in town, I’ll probably eat in this area again.  If you get a chance – make sure to try Tomato Pie.  It was so good, I tried to recreate it at home (mine was not nearly as good).

Richmond is also close to several battlefields.  One of the most notable is Petersburg only 23 miles to the South.  Petersburg is notable for a couple of reasons.  It was the longest battle of the war lasting over nine months.  The long battle, sometimes referred to as a siege, resulted in trench warfare which was used extensively fifty years later during World War I.  And, the South’s defeat at Petersburg directly led to the fall of Richmond and the end of the war.  (If you drive to Petersburg, check out Saucy’s BBQ for lunch). 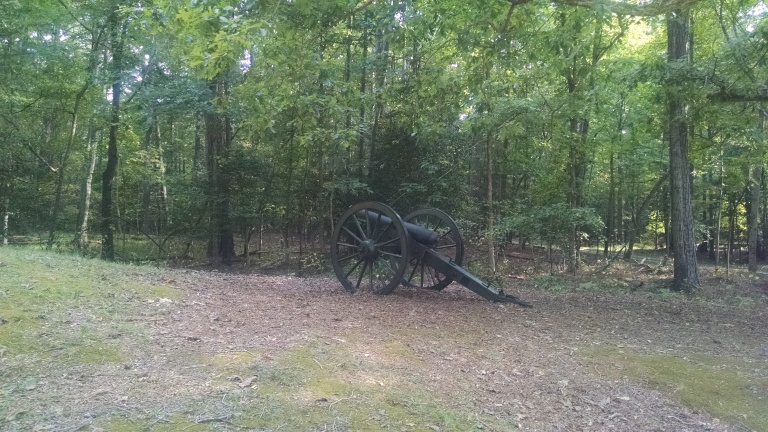 You could spend several days or longer in the area.  Richmond is central to other sites such as Williamsburg, Jamestown, Yorktown, Monticello and the beach.

While not specific to Richmond, some good books, movies and TV shows to learn more about the Civil War include North & South; Gone with the Wind; Glory; and Mercy Street.