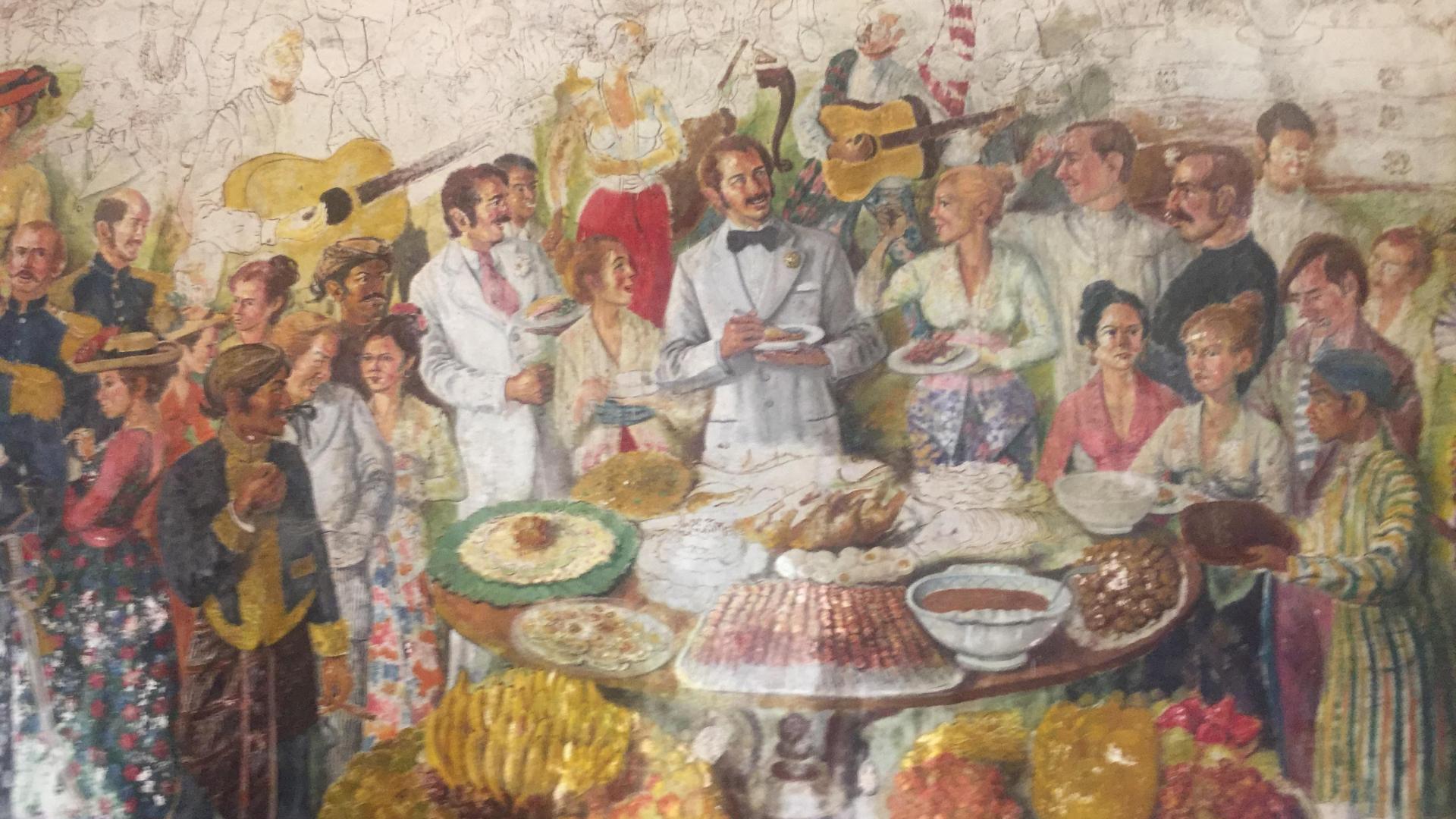 Jakarta is the jumping off point for the rest of Indonesia.  For me it was the connection to see Orangutans in Borneo.  Because it is a major capital city, it felt important to at least spend a couple of days there.

But a couple of days is definitely enough!  Jakarta is a city for living and a city for business.  It is not a city for touring or visiting.  It is by far the least walkable city I have ever been to, and traffic is horrendous.

Indonesia has 2 seasons – rainy and dry.  Both are hot.  The country has a complex history of colonialization of the Dutch, British and Japanese.  It has thousands of islands, hundreds of languages and a wide diversity of people and cultures.  It is also the largest Islamic country in the world but rules and laws vary greatly from Sharia law in Northern Sumatra to the laid back tourist culture of Bali.  Islam in Indonesia dates to the 11th century, even before most of the Middle East.  However, the culture includes a fascinating mix that includes both Buddhism and Hinduism.

The city is up and out early which I always appreciate it.  I found the people exceptionally friendly and helpful people.  English was widely spoken.  The city was very affordable and contrary to what I expected, I felt safe the entire time.

I would definitely not recommend visiting Jakarta as a destination.  However, if transiting through or there for business, here are some ideas of what to do (or not to do) while there. 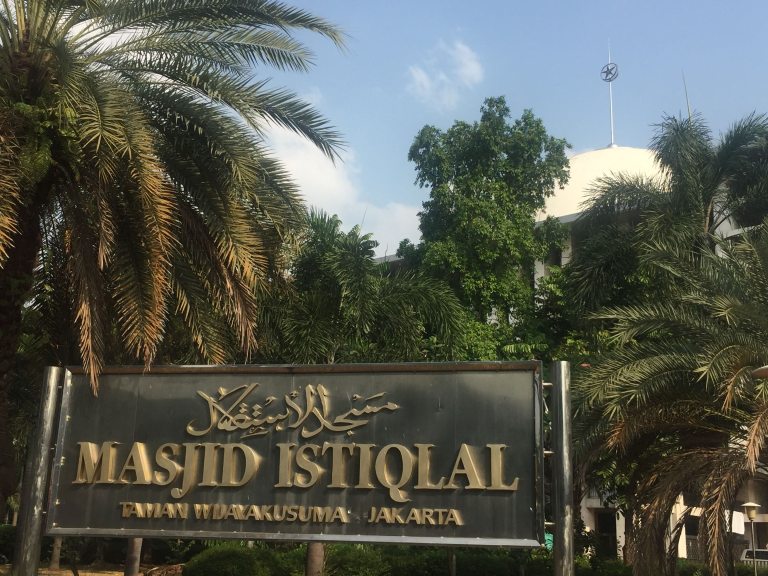 Istiqlal Mosque is the largest in Asia and the 3rd largest in the world (the largest outside of Saudi Arabia).  The mosque was very receptive to visitors and very hospitable.  They were exceptionally strict on the dress code (more so than I ever found in the Middle East) but have loaner robes and scarves.  The mosque is very new, utilitarian and not very ornate.   I would not particularly recommend it except if you love “est” and can’t resist the largest mosque outside Saudi (which frankly for realistic purposes makes it the largest mosque most of us will ever have the opportunity to visit).

I loved that the Mosque is right across the street from Jakarta Cathedral.  This reminded me of Tirana Albania and lent credence to the countries’ moto, “unity through diversity”.

In the same area as the mosque and cathedral you can find the national monument, Monas, Merdeka square and the National Museum.  Don’t let a map full you.  Although all of these locations are within a mile of each other, getting from one to the other was extremely difficult and time consuming.  But they are all worth a short stop.

The Dutch Colonial Museum in Kota the old town was interesting but I was hoping for more history and less furniture.  However the adjacent Fatahillah Square was by far my favorite stop in Jakarta.   It was alive with people, music, color and activity.  There were families everywhere.  People on bicycles and kids with bubbles.  It was a wonderful spot to just stop and people watch.

From photos, Jakarta has a beautiful sky line and your view is limited when stuck in traffic.  We tried twice to get to the Skye bar but failed miserably.

I am not one for chain hotels, but it was convenient for this trip and so we stayed at the Le Meridian.  By western standards it was very affordable 5 star level comfort.  However, their breakfast was AMAZING and now tops my list for my favorite EVER

Also of note was the wonderful meal we had at Penan Bistro.  They have a huge menu and everything we had (veggies, seafood, lamb and duck) was delicious.

Because of the Logistics of the trip I had one extra day in Jakarta and decided to do a day trip outside of the city.  Because of traffic I recommend you pick just one place and then add on one or two stops based on location. 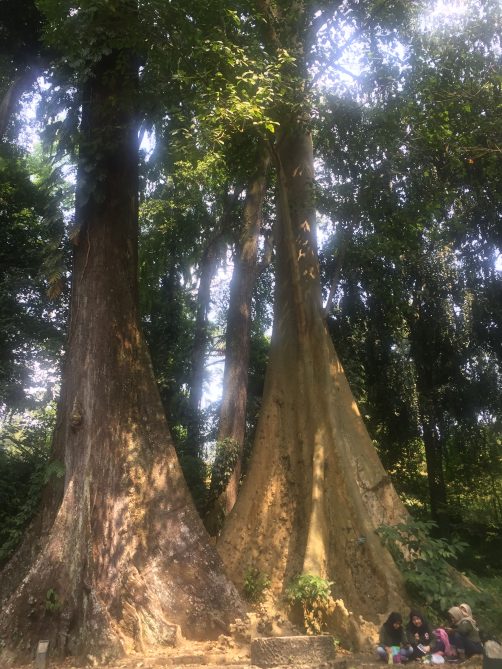 Bogor Botanical Gardens:  While not spectacular, I am glad we went for a couple of reasons.  This is where the locals go.  The gardens were filled with school children, families and large groups.  It was busy on a Thursday morning, I can’t imagine what it must be like on a weekend.  The gardens also give you a wonderful appreciation for the animal and plant diversity of Indonesia.  I’d read about it before my trip and experienced some of it in Borneo, but at the gardens it became much more clear.

Puncak Gunung Mas Tea Gardens:  Over 3 hours from Bogor (but less than 75 kms) was worth the trip.  It was breathtaking beautiful and significantly cooler.  On the drive you pass lots of small towns and get a feel for Indonesia outside of the city.

Other day trips I considered were Ciherang Waterfall, Cimory riverside, paragliding or a visit to the Thousand Islands.

Verdict – don’t make a special trip there but if there to transit you a day or two is definitely interesting.